This June I officially graduated from the Florence Academy of Art. Although I still have one more term to complete my education there, I had the pleasure of walking with the 2016 graduating class. 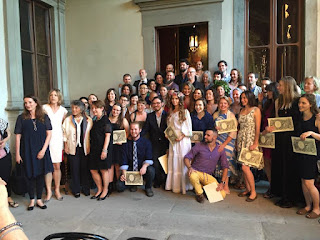 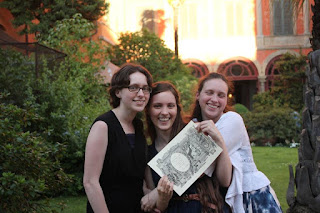 Even more exciting, I am pleased to say that at the graduation ceremony I had the honor of receiving an award. My final still-life was granted Best Still Life of the Year. This particular painting was a long and challenging project, so to have my work recognized in this way was an amazing and unreal experience. 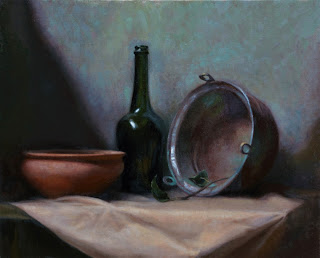 It's been a quick year and a half, but I am amazed by how much I have learned in so short a time. I started off the winter term with another still-life painting. Originally, my idea was to make a still life based on the Japanese philosophy of Wabi Sabi. Wabi Sabi is an aesthetic which focuses on the beauty of things that are imperfect or transient. For compositional reasons I had to sacrifice the theme a bit, but I tried to include a bit of the original idea in the focal point of the painting, an otherwise perfect white cup with a crack, which rests on top of a fallen leaf. The first still-life painting at school is supposed to be of light objects against a dark background, so I took the opportunity to set the objects against a backdrop of mysterious shadows. 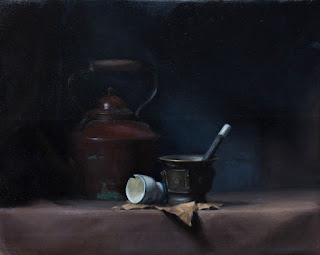 After a few still-lifes, I did my first portrait oil painting while studying at FAA (my previous ones being charcoal drawings). 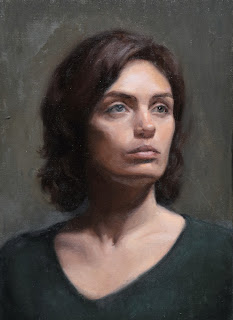 What I especially hoped to capture about this pose was the sense of light illuminating the model's face. To achieve this involved a great deal of simplification of values within the lights and especially in the shadows, the sense of form largely being achieved in the transition between the two.
For my second portrait I took progress photos to capture the step-by-step process:

Alongside working on portraits and still life, I also studied figure painting. My final longpose of the year was a five-week-long seated pose: 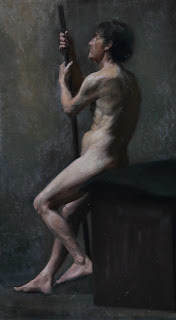 Personally my favorite project was a bit of an experiment, a simple still-life of a boot. Since coming to Florence I've adjusted to traveling around the city almost entirely on foot, which sometimes takes a toll on my footwear. After wearing out from months of treading over the cobble-stone streets, one such unlucky shoe made it's way into my still-life. I like to think of it as a bit of a tribute to Van Gogh's painting of the same subject, to which I looked for some inspiration. 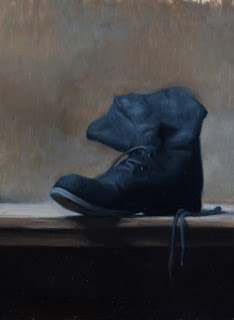 This project was slightly different because I had a short amount of time to work on it, only about three days. This meant adjusting my method a little and adopting a much bolder and more direct way of painting than usual, which, though challenging at first, became very liberating.
At the end of the year my class's studio held an open house. It was very fulfilling to see the work everyone's put so much time and energy into on display. 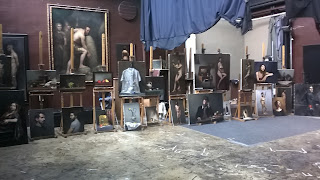 As exciting as graduation is, I am certainly going to miss painting alongside this group of diligent and artistic people. I know this fall I am going to hold onto every moment of my last term.  Even a year and a half later, I cannot express enough my gratitude for being able to study at this amazing place that is Florence Academy. To all those who made this possible, I am forever thankful.
Thank you,
Eliza Moser 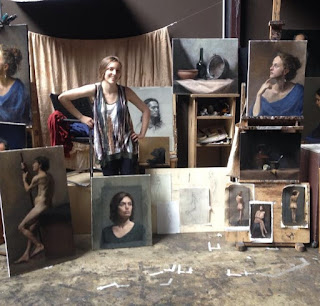